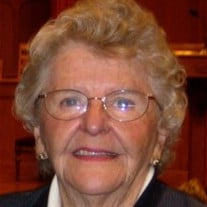 Louetta Griffin Proctor, 82, formerly of Bloomfield, Iowa passed away July 6, 2015 at Hillside Village in DeSoto, Kansas. She was born May 20, 1933 in Centerville, Iowa, the fourth daughter of Richard Joseph and Ethel Ruth Dixon Griffin. Louetta married Mervin D. Proctor on September 4, 1955 at the Presbyterian Church in Centerville, Iowa. He preceded her in death March 9, 2002. Their entire married life was spent on a farm north of Troy, where Louetta remained for 52 years. She worked as a Radiology Technologist at the Davis County Hospital for 22 years, as well as the Gilfillan Clinic, Van Buren County Hospital and other medical offices. As a surprise to many, Louetta transitioned from a city girl to be a dedicated and involved farmer’s wife. Over the years, Louetta was involved with her children’s activities with Explorer Troop 91, PTA, 4-H, “A” Club, Band Boosters and trip chaperone. She was a 50-year-member of the Order of Eastern Star. Louetta enjoyed being active with Past Matrons, Mission Circle Club, Bethlehem Ladies Aid, Red Hat Ladies, and had some great trips with the Premier Club. She served the community as a County Council Extension Service member and a Long-Term Care Ombudsman. Louetta was a member of the United Methodist Church and the UMW. Louetta enjoyed making cookies with her grandkids, traveling, quilting, ceramics, card club, baking, canning and crocheting. She LOVED her family and having them around her dining room table. She is survived by a daughter, Lou Ann (Gary) Proctor of Lenexa, Kansas; three sons, Charles (Lorraine) Proctor of Auburndale, Florida, Monte (Debbie) Proctor of Solon, Iowa, Chad (Ami) Proctor of Cedar Rapids, Iowa; ten grandchildren, Sarah Kingsbury, Joshua Teaney, Logan Proctor, Ian Proctor, Reagan Proctor, Kyle Proctor, Kylie Proctor, Shawn Proctor, Olivia Proctor, Sydney Proctor; a great-grandson, Ansel Kingsbury; and a brother-in-law, Mark Kelly. She was preceded in death by three sisters, Joan Ruth O’Dougherty, Helen Jane Kelly, Dorothy Jean Griffin; and two brothers-in-law, John Harris O’Dougherty and Benny Wayne Proctor. Funeral services will be at 2:00 p.m. on Saturday, July 18, 2015 at the Wagler Funeral Home in Bloomfield with Pastor Richard Friend officiating. Burial will be at the Oakland Cemetery in Centerville, Iowa. Visitation will begin at 9:00 a.m. on Saturday with the family present to greet friends from noon until the time of the service. Memorials have been established to Crossroads Hospice and the Bloomfield United Methodist Church.

The family of Louetta Proctor created this Life Tributes page to make it easy to share your memories.

Send flowers to the Proctor family.