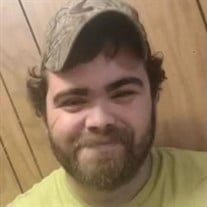 Raymond Lucas “Luke” Aldrich, 28, of rural Bloomfield, Iowa passed away on April 23, 2022 at the Iowa Methodist Medical Center in Des Moines. He was born on June 20, 1993 in Des Moines to Marvin Dale Aldrich and Bobbie Jo Shever. He graduated from Washington High School in Washington, Iowa. Luke worked for EPC in Kalona, Iowa for several years and currently worked for Davencorp in Bloomfield as a welder. Luke was hardworking and thoroughly enjoyed welding. Luke was an outdoorsman to his heart. He loved hunting, fishing, camping, shooting guns, and cutting firewood. He was an avid Denver Broncos fan and enjoyed spending time with his family. He is survived by his father, Marvin (Tina) Aldrich of Bloomfield; mother, Bobbie Jo Knowles of New Braunfels, Texas; siblings, Rebecca (Justin) Chambers, Bridgett (Brandon Lewis) Aldrich, Rodney (Jolynn) Hill, Saundra Aldrich, Sheila Aldrich, Ashlee Barr, Cody (Cassidy) Barr; grandparents, John and Ruth Vest; Uncle, David (Charmain) Aldrich of West Chester, Iowa who he was very close to; several aunts, uncles, nieces, nephews, and cousins. He was preceded in death by his grandparents, Ray and Pansy Aldrich. Funeral services will be at 7:00 p.m. on Thursday, April 28, 2022 at the Wagler Funeral Home in Bloomfield. Visitation with family present to greet friends will be from 5:00 p.m. until the time of the service on Thursday. Burial will be at the Weesner Cemetery near Ravanna, Missouri at 11:00 a.m. on Friday. In lieu of flowers, a memorial has been established to his family.

The family of Luke Aldrich created this Life Tributes page to make it easy to share your memories.

Send flowers to the Aldrich family.