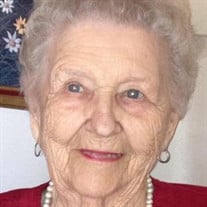 Mildred Lorraine Simmons passed away November 4, 2021 at the Bloomfield Care Center. She was born July 11, 1923 to Arlo Shook and Ora Gordy Shook, the oldest of 6 children. Growing up in the midst of the Great Depression, she learned that having a lot of fun was much more important than having a lot of possessions. She married J. Rex Simmons on July 3, 1940 in Centerville, Iowa. For 78 years together, they demonstrated a love and commitment to each other and to their family that exemplified what marriage and family should be. Lorraine’s life was focused on her husband, her children, and her grandchildren. When they were first married, Lorraine and Rex ran the switchboard in Drakesville. When Rex went off to serve his country in the Pacific during World War II, Lorraine kept the home fires burning, caring for their young son Rodger on her own until Rex returned. As Rex built a business to support their growing family, Lorraine supported Rex and the kids with unconditional love and lots of homemade food. She supported her kids’ interests and activities by joining the PTA and the Band Boosters, by serving as a Den Mother for the Cub Scouts and helping with Sunday School and Vacation Bible School. She lent her time and efforts to build a new school and to get girls basketball started in Davis County. She baked countless cupcakes and pies for school and church fundraisers. She belonged to the American Legion Auxiliary and other service organizations that focused on helping and supporting others. Lorraine also believed in having fun. She belonged to several card clubs and played Bingo as long as she could still see the cards. She learned to play golf with Rex, and she was always up for games with the grandchildren. Holidays at her house were characterized by too much food and the right amount of fun. She liked to fish and to read and to watch Cubs and Cardinals baseball. When Rex retired, they spent the winters in Florida, and eventually a number of friends and relatives moved down to be near them. But Lorraine’s heart was always in her hometown where she could be near her children, grandchildren, and great-grandchildren. Lorraine is survived by a son, Rodger (Carol) Simmons of Bloomfield; a daughter, Lana (Larry) Boone of Lake City, Florida; a daughter, Rhonda (Clayton) Eakins of Bloomfield; and a daughter-in-law Marsha (Terry) Wilhoit of Batavia; two sisters, Rowena Fletcher and Molly Williams; a brother, Martin Shook of West Des Moines; 7 grandchildren, 19 great-grandchildren, and 5 great-great grandchildren. She was preceded in death by her husband, Rex; son, Brian, parents; two sisters, Coleen Vorhis and Crystal Webb; son-in-law, Larry Boone; granddaughter, Jessica Eakins; and a great-grandson, Reece Boone. Funeral services will be at 2:00 p.m. on Sunday, November 7, 2021 at the Bloomfield United Methodist Church with Pastor Thom Bryant officiating. Burial will be at the Drakesville Cemetery. Casket bearers will be Clayton Eakins, Terry Wilhoit, Jim Nelson, Dylan Nelson, Jared Eakins, Eric Boone and Ryan Boone. Visitation with family present to greet friends will be from 1:00 p.m. until the time of the service at the church. Memorials have been established to the Bloomfield United Methodist Church and Good Samaritan Hospice.

Mildred Lorraine Simmons passed away November 4, 2021 at the Bloomfield Care Center. She was born July 11, 1923 to Arlo Shook and Ora Gordy Shook, the oldest of 6 children. Growing up in the midst of the Great Depression, she learned that having... View Obituary & Service Information

The family of M. Lorraine Simmons created this Life Tributes page to make it easy to share your memories.

Mildred Lorraine Simmons passed away November 4, 2021 at the...

Send flowers to the Simmons family.