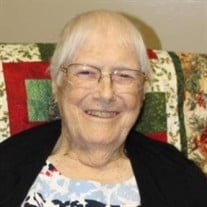 Margaurette Wilburn, 88, of Bloomfield, Iowa passed away on April 7, 2020 at the Bloomfield Care Center. She was born December 30, 1931 in Davis County, Iowa to Jonathan and Helen Beggs Aeschliman. She married Jay Wilburn July 22, 1950 in Bloomfield. She graduated from Eldon High School in 1951. She was a baker at Fairfield Middle School for over twenty years and had previously been employed at the Place’s store in Fairfield, at the General Store in Libertyville and babysat children. Margaurette was a member of the Bloomfield United Methodist Church, served on the board of the Senior Citizens Center, held office in the Mission Circle, worked at the Welcome Center, and was active in Faith Circle at the Bloomfield Methodist Church. Her hands were always busy creating something, whether it was delicious baked goods (anyone who got one of her care packages was truly blessed), handmade crafts that included piecing quilts, afghans, and a wide variety of decorative items, especially for the holidays. She was very fond of passing her skills on to those who wanted to learn, especially her grandchildren. Many photos exist of little hands making cinnamon rolls with Grandma. She is survived by three sons, Mike (Marilyn) Wilburn of Concord, California, Carl (Karen) Wilburn of Glidden, Iowa, Tony (Kim Noyes) Wilburn of Leslie, Missouri; she was honored to count 15 grandchildren; 34 great-grandchildren (with one more on the way), and one great-great-grandchild in her extended family; a sister, Eldinah Stockham of Bloomfield and a brother-in-law, Richard Swanson of Ollie, Iowa. She was preceded in death by her husband, parents, and two sisters, Dorothy Jo Swanson, and Nanette McBride. A private service will be held with Rev. Tim Frasher officiating. Burial will be at the Bloomfield IOOF Cemetery. A public memorial service will be scheduled at a later date.

Margaurette Wilburn, 88, of Bloomfield, Iowa passed away on April 7, 2020 at the Bloomfield Care Center. She was born December 30, 1931 in Davis County, Iowa to Jonathan and Helen Beggs Aeschliman. She married Jay Wilburn July 22, 1950 in Bloomfield.... View Obituary & Service Information

The family of Margaurette Wilburn created this Life Tributes page to make it easy to share your memories.

Margaurette Wilburn, 88, of Bloomfield, Iowa passed away on April...

Send flowers to the Wilburn family.