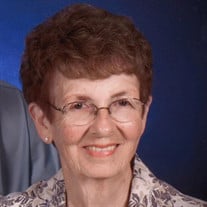 Martha Marieta Eakins, 94, of Bloomfield, Iowa passed away on March 13, 2022 at MercyOne Des Moines Medical Center. She was born on August 30, 1927 in Paris, Iowa to Earnest and Margaret Whisler Morrison. She attended schools in Davis County and graduated from Bloomfield High School. In 1944, she married Charles Marion Thompson Sr. in Schuyler County, Missouri.  They later divorced.  Marieta married Donald Lloyd Eakins on March 11, 1969.  He passed away on May 27, 2016. Marieta worked at Knock on Wood in Bloomfield, McGraw's in Centerville, and as a waitress. She enjoyed organizing family gatherings and loved the laughter and conversations with all of her family and friends. She especially enjoyed square dancing, playing Pitch (cards) and playing dominoes with her grandchildren. Her son, Chuck, was the apple of her eye and her whole world. She often said it was her and Chuck against the world. She spoke to him daily - maintaining a solid connection. Her faith was steadfast even after his sudden passing. To Marieta, they were the best of friends and she is now reunited with him! She knew how to lead and used her skills in the church and work settings. She was also a role model of perseverance to her family. She is survived by two sisters, Freda Purdom, Carolyn Bankson; brother, Danny Scott; Step-son, Danny Milburn; granddaughter, Danielle (John) Kennedy; grandson, Jesse (Jennifer) Thompson; great-grandchildren, Landon Avery Kirk, Brody Cole Thompson, Emorye Rose Thompson; and numerous nieces, nephews, great-nieces, and great-nephews. She was preceded in death by her parents; husband; son, Charles "Chuck" Thompson Jr. (wife Denise still living); and seven siblings, Osa Dowe (Buster) Scott Jr, Marilyn Brookhart, Darrell D. Scott, Patricia Robertson, Devere Scott, Lowell Scott, Vera Lynn Scott. Funeral services will be at 10:00 a.m. on Saturday, March 19, 2022 at the Wagler Funeral Home in Bloomfield with Rhonda Eakins officiating.  Burial will be at the Taylor Cemetery in Appanoose County, Iowa.  Visitation will begin at 1:00 p.m. on Friday with the family present to greet friends from 5-7:00 p.m. at the funeral home.  A memorial has been established to the Taylor Cemetery.

Martha Marieta Eakins, 94, of Bloomfield, Iowa passed away on March 13, 2022 at MercyOne Des Moines Medical Center. She was born on August 30, 1927 in Paris, Iowa to Earnest and Margaret Whisler Morrison. She attended schools in Davis County... View Obituary & Service Information

The family of Marieta Eakins created this Life Tributes page to make it easy to share your memories.

Martha Marieta Eakins, 94, of Bloomfield, Iowa passed away on...

Send flowers to the Eakins family.