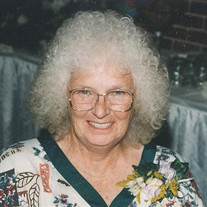 Martha Anna Stephenson, 92, of rural Bloomfield, Iowa passed away on February 14, 2020 at the Ottumwa Regional Health Center. She was born October 12, 1927 in Davis County, Iowa to Ralph Eugene and Lilly Katherine Laughridge Dunlavy. She married William David Stephenson on May 24, 1946 and they would later divorce. Martha worked at the Bloomfield Care Center for many years. She was a hard worker and during winter storms she would often go in the night before and sleep at work to make sure she was there to do her job of cleaning for the residents and facility. In her free time, Martha enjoyed reading her Bible and had a green thumb with plants. When saying “goodbye” or “see you later,” to her, she would often reply “If the good Lord’s willing.” She had attended Westchester Evangelical Free Church in Des Moines, Drakesville Methodist Church, and the Bloomfield Christian Church. She is survived by three children, David Eugene Stephenson, Virginia (Rex) Smith both of Des Moines, Robert E. (Mary Kay) Stephenson of Drakesville, Iowa. Ten grandchildren, Tina, Tim, Tonya, Frank, and Cassie Stephenson, Kristi Seibert, Mike Smith, Kelly Johnson, Rochelle and Madison Stephenson; 13 great-grandchildren, Joshua Walker, Alexis Glosser, Shawn and Jayden Stephenson, Timothy Causey, Mikayla and Mackinize LaFarr, Lydia Scarborough, Zane and Sophia Seibert, Torin and Lucas Johnson, Shayla Gross; and two great-great-granddaughters, Autumn and Kylee Glosser. She was preceded in death by her parents; two brothers, Bert and Richard Dunlavy; and a sister, Mary Orman Funeral services will be at 11:00 a.m. on Saturday, February 22, 2020 at the Wagler Funeral Home in Bloomfield. Cremation will follow the services. Visitation with family present will be from 9:30 a.m. until the time of the service on Saturday. Memorials have been established to the Iowa Theatre in Bloomfield and to the family.

The family of Martha Stephenson created this Life Tributes page to make it easy to share your memories.

Send flowers to the Stephenson family.