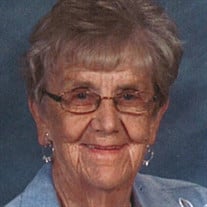 Martha Jean Utt, 90, of Bloomfield, Iowa passed away on February 24, 2021 at her daughter’s home in Bloomfield. She was born March 27, 1930 in Bloomfield to Haden and Eula McElhinney Craig. She graduated from high school in 1948 and married Harold Utt later that year on August 26, at the First Baptist Church in Bloomfield. She attended Iowa State Teacher’s College and taught in a rural school for a few years. The couple purchased the family farm in 1957 and raised three children; Susan, Gary, and Jimmie. Many happy memories were created on the farm over the years and Martha cherished the time she had with her family. Harold and her (along with help from the kids) farmed together, raised livestock, and milked cows. Harold passed on May 8, 1985. Martha spent many happy years chasing after grandchildren and attending all their events including baseball, softball, football, basketball, tennis, show choir, and livestock shows at the fair. Martha was also an active member of the community. She was a member of the Bloomfield United Methodist Church, participated on a bowling team, and even joined a quilting group for the social aspects. She was famous for her chocolate chip cookies and her fried chicken. After the beef show at the Davis County Fair, she would always make fried chicken for everyone – a tradition that lasted for over 40 years. She will be greatly missed by her family and friends. She is survived by her daughter, Susan (Fred Zeitler) Utt-Smith of Bloomfield; two sons, Gary (Sue) Utt, Jimmie (Lori) Utt both of Bloomfield; eight grandchildren, Libby (Brandon) Wood of LaPlata, Missouri, Leslie (Blake) Lough, Lincoln (Ashley) Utt, Lindsay (Adam) Smith, Lori (Brandon) Bish, all of Bloomfield, Austin (Amber) Utt of Adel, Iowa, Calvin (Megan Sowa) Utt of Clive, Iowa, Justin (Fiancé Taylor Overstreet) Utt of Madison, Wisconsin; grandson-in-law, Eric Rowell of Rock Island, Illinois; 19 great-grandchildren; siblings, Margaret Fox, Marquetta (Dan) Kinnamon both of Omaha, Nebraska, Hershel (Betty) Craig of Tucson, Arizona, Marilyn (Dick) Seeman of Georgetown, Texas; and many nieces and nephews. She was preceded in death by her parents; husband; granddaughter, Amy Rowell; son-in-law, Maury Smith; and four brothers, Herbert, Haden Jr., Harold, and Homer Craig. Funeral services will be at 10:30 a.m. on Monday, March 1, 2021 at the Wagler Funeral Home in Bloomfield with Rhonda Eakins officiating. Burial will be at the IOOF Cemetery in Bloomfield. Visitation will begin at noon on Sunday with the family present to greet friends from 4-6:00 p.m. at the funeral home. A memorial has been established to the Davis County Fair.

Martha Jean Utt, 90, of Bloomfield, Iowa passed away on February 24, 2021 at her daughter&#8217;s home in Bloomfield. She was born March 27, 1930 in Bloomfield to Haden and Eula McElhinney Craig. She graduated from high school in 1948 and... View Obituary & Service Information

The family of Martha Utt created this Life Tributes page to make it easy to share your memories.

Martha Jean Utt, 90, of Bloomfield, Iowa passed away on February...

Send flowers to the Utt family.