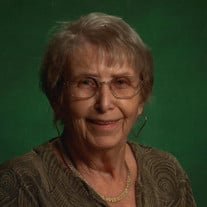 Mary Lou Thordarson Nichols, 87, of Bloomfield, Iowa passed away on September 27, 2021 at the Bloomfield Care Center. She was born on September 11, 1934 in Williston, North Dakota to John David and Gladys Etta Dolliver Jeffrey. She married Edmund Thordarson on May 4, 1953 in Grand Forks, North Dakota. He passed away in 1980. Mary Lou was a registered nurse for many years. She worked at a nursing facility while living in Moberly, Missouri and worked for the Davis County Hospital while living in Bloomfield. She was very active with the Bloomfield Senior Center where her volunteer efforts earned her the Governor’s Volunteer Award. She also reported on the Senior Center as a writer for the Bloomfield Democrat. Mary Lou enjoyed taking care of flowers and plants, bowling, and playing cards with her card club. She was a proud member of the Red Hat Society and the Bloomfield United Methodist Church. She is survived by her children, Leslie (Steve) Dlugosch of Spencer, Iowa, Jeffrey (Sharon) Thordarson, David (Sherri) Thordarson, Kay Thordarson Wright all of Bloomfield; seven grandchildren, Theola McElderry, Taryn Thordarson, Erica Thordarson, Sydney Thordarson, Chelsea Thordarson, Dreyman Wright, Nathan Thordarson; and eleven great-grandchildren, Jefferson, Jonathan, Jamison, Josephine, Jillian, and August Otter, Brandon, Taylor, Harper Thordarson, Gavyn and Marshawn Thordarson. She was preceded in death by her parents; husband; two sons, Paul and Carl Thordarson; son-in-law, David Wright; daughter-in-law, Deb Thordarson; brother, John “Jack” Jeffrey; and sister, DeWan Dobson. Mary Lou’s wish was to be cremated. Visitation will begin at 3:00 p.m. on Friday, October 8, 2021 at the Wagler Funeral Home in Bloomfield with the family present to greet friends from 5-7:00 p.m. Interment will be at a later date at the IOOF Cemetery in Bloomfield. A memorial has been established to the Bloomfield Senior Center.

Mary Lou Thordarson Nichols, 87, of Bloomfield, Iowa passed away on September 27, 2021 at the Bloomfield Care Center. She was born on September 11, 1934 in Williston, North Dakota to John David and Gladys Etta Dolliver Jeffrey. She married... View Obituary & Service Information

The family of Mary Lou Thordarson Nichols created this Life Tributes page to make it easy to share your memories.