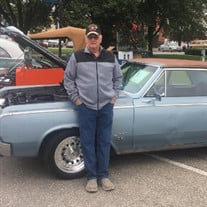 Michael Smith, 71, of Bloomfield, Iowa passed away on January 20, 2021 at his home. He was born June 8, 1949 in Ottumwa, Iowa to Guy Eugene and Mary Elizabeth Gibson Smith. He was enlisted in the Army from 1969-1971 and courageously served in Vietnam, earning the Purple Heart. On January 4, 1969 he married Shirley Jean Prevo in Bloomfield. The couple settled in Bloomfield and raised three children; Charity, MacKenzie, and Adam. Mike was a journeyman electrician and worked for Acme-Johnson Electric for over 20 years, then for Winger Electric, retiring when he was 63. He was a proud member of IBEW Local 13 out of Burlington. Mike enjoyed tinkering on projects, taking his old Cutlass to car shows, and doing odd jobs for his family - earning the reputation that if Grandpa couldn’t fix it, then no one could fix it. Mike also loved playing golf and spending time with his friends during men’s league on Wednesday nights at the Bloomfield Country Club. He also enjoyed going to many different golf courses with his golf friends. Mike was a family man and getting together with all the extended family was something he always looked forward to. He will be greatly missed by his family and friends. He is survived by his wife, Shirley; three children, Charity (Travis) Gooden of Bloomfield, MacKenzie (Brad) Parsons of Kirksville, Missouri, Adam (Lindsay) Smith of Bloomfield; seven grandchildren, Allison (Cole Spoelstra) Gooden, Ashlyn Gooden, Clara Smith, Culee Smith, Brody Parsons, River Parsons and last but not least, Canon Smith; four siblings, Keith (Kay) Smith of Bloomfield, Barry (Doris) Smith of Clive, Iowa, Marcia (Jerry) Lippert of Iowa City, Pam Davison of Bloomfield; and many nieces and nephews. He was preceded in death by his parents; infant son, Frederick David Smith; siblings, Carolyn Ensminger, Estellene McClurg, Florence Roberts, Diana Lawson, Ronald Smith, and an infant sister. A celebration of life gathering will be held on Saturday, June 19, 2021 from 2-5:00 p.m. at the Bloomfield Country Club. Family will be present to greet friends. Memorials have been established to the Bloomfield Country Club or to Wreaths Across America.

Michael Smith, 71, of Bloomfield, Iowa passed away on January 20, 2021 at his home. He was born June 8, 1949 in Ottumwa, Iowa to Guy Eugene and Mary Elizabeth Gibson Smith. He was enlisted in the Army from 1969-1971 and courageously served... View Obituary & Service Information

The family of Michael Smith created this Life Tributes page to make it easy to share your memories.

Michael Smith, 71, of Bloomfield, Iowa passed away on January...

Send flowers to the Smith family.