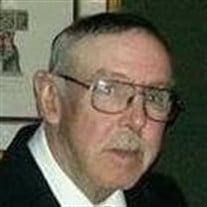 Michael Ray Garmon, 66, of rural Bloomfield, Iowa passed away on May 30, 2018 at the University of Iowa Hospitals and Clinics in Iowa City after a courageous battle with cancer. He was born January 15, 1952 in Bloomfield to James Edward and Deloris Jean McEldowney Garmon. He graduated from Davis County High School with the Class of 1970 and attended Indian Hills Community College for two years. On January 12, 1980 he married Dixie Strawhacker at the Pulaski Methodist Church. Mike worked for American Welding and Tank for 25 years in Bloomfield until it closed in 2009. He then worked for Troy Elevator for the last five years. Mike was a hard worker who liked to be outside doing yardwork, spending time with family, or tinkering with his antique tractors. He also enjoyed many sports, playing fast and slow pitch softball, horseshoes, and going bowling. He was a member of the Davis County Fair Board. He is survived by his wife; Dixie Garmon; mother, Deloris Garmon of Pulaski; five children, Lisa (Keith) Welty of Otis, Kansas, Teresa (David) Hart of Mulvane, Kansas, David (Shara) Garmon of Cordell, Oklahoma, Crystal (Jon) Sieck of Toledo, Iowa, Gary (Jesi) Garmon of Bloomfield; 18 grandchildren; two great-grandchildren; three sisters, Joy (Steve) Mueller of Winterhaven, California, Donna (Richard) Smith of Agency, Iowa, Sandy (Brett) Haines of Bloomfield; four sisters-in-law, Deb (Kim) Frymoyer of Pulaski, Iowa, Terry Appenzeller, Candy Thaxton both of Bloomfield, Carla Strawhacker of Burlington, Iowa; brothers-in-law, Doug Strawhacker of Vienna, Illinois, Danny (Patty) Rupe, Dave (Shari) Rupe, Dean Rupe all of Ottumwa; and several nieces and nephews. He was preceded in death by his father, James Edward Garmon; grandparents; two uncles; two aunts; his mother and father-in-law, Daisey and Frank Rupe; and sister-in-law, Cindy Strawhacker. Funeral services will be at 2:30 p.m. on Saturday, June 2, 2018 at the Wagler Funeral Home in Bloomfield with Pastor Bill Eakins officiating. Burial will be at the Pulaski Cemetery. Visitation will begin at 2:00 p.m. on Friday with the family present to greet friends from 5-7:00 p.m. at the funeral home. In lieu of flowers, a memorial has been established to his family.

Michael Ray Garmon, 66, of rural Bloomfield, Iowa passed away on May 30, 2018 at the University of Iowa Hospitals and Clinics in Iowa City after a courageous battle with cancer. He was born January 15, 1952 in Bloomfield to James Edward and... View Obituary & Service Information

The family of Mike Garmon created this Life Tributes page to make it easy to share your memories.

Send flowers to the Garmon family.