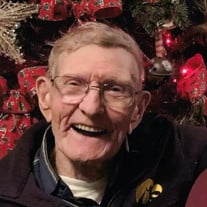 Norvel Jacob Robison, 88, of Pulaski, Iowa passed away on February 27, 2022 at the Davis County Hospital. He was born on July 25, 1933 in Mystic, Iowa to Floyd Robison and C. Margret Turney. He was raised by Roy Richmond and C. Margret Turney. He served in the Army during the Korean War. On March 29, 1954, he married Shirley Morgan. The couple settled in Pulaski and raised three children; Lynn, Kim, and Jerry. Shirley passed away on February 16, 2012. Norvel drove a truck and hauled rock for Morrison's Trucking, worked at R&L Truck Stop, drove a semi for Meadow Gold in Ottumwa, then worked for Davis County in the bridge department and hauling gravel. He was proud that he helped work on Interstate 80 when it was being built. Norvel was an outdoorsman and enjoyed fishing, hunting, and trapping. He trapped the first bobcat in Iowa. He loved spending time with his family, playing cards, traveling, and going to the casino. Norvel was also a baseball coach and softball coach for many years. He was an avid St. Louis Cardinals fan. He is survived by two daughters, Lynn (Richard) Whitacre, Kim (Fred) Smith both of Pulaski; son, Jerry (Kristy) Robison of Moravia, Iowa; nine grandchildren; twelve great-grandchildren; brother, Delbert (Marsha) Richmond of Bloomfield; and brother-in-law, Roy Morgan of Livonia, Missouri. He was preceded in death by his parents; wife; grandson-in-law, Eron Prevo; and eleven siblings, Mildred Guy, Evelyn Hart, Maxine Carlson, Edna Faron, Darlene Young, Lois Dolan, Carol Jo Sullivan, Max Richmond, Jimmie Dee Richmond, Pearl "Buddy" Richmond, and Roy Dale Richmond. Funeral services will be at 10:00 a.m. on Friday, March 4, 2022 at the Wagler Funeral Home in Bloomfield with Pastor Christy Ehrle officiating. Burial will be at the Pulaski Cemetery. Military rites will be performed by Reed-Whisler Post #78 of the American Legion. Visitation will begin at noon on Thursday with the family present to greet friends from 5-7:00 p.m. at the funeral home. A memorial has been established to the Pulaski Avenue of Flags.

The family of Norvel Robison created this Life Tributes page to make it easy to share your memories.

Norvel Jacob Robison, 88, of Pulaski, Iowa passed away on February...

Send flowers to the Robison family.