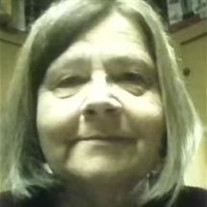 Patricia Louise Vanderhoof, 65, of Drakesville, Iowa passed away on June 29, 2018 at her home. She was born August 23, 1952 in Ottumwa, Iowa to James Thomas and Gladys Louise Long Wilster. She attended Ottumwa High School (Class of 1970) where she excelled in various sports including bowling and basketball. On January 22, 1976 she married Floyd Vanderhoof in New Jersey. The couple would eventually settle in Davis County and raise two children, John and Michael. Pat worked at Davis County Lanes in Bloomfield and as a receptionist for Shaul Cemetery in Ottumwa for many years. She loved bowling and was involved in Y.A.B.A. for several years. She also enjoyed going to casinos and playing penny slots, playing BINGO, and spending time with her family, friends, and animals. Pat will be greatly missed. She is survived by her husband, Floyd Vanderhoof; two sons, John (Tracy) Vanderhoof of Ottumwa, Michael (Hailey) Vanderhoof of Bloomfield; four grandchildren, Quincy Vanderhoof, Blaine (Jen) Caldwell, Mariah (Joe) Hoium, Presley (Brett) Caldwell; five great-grandchildren; three sisters, Connie (Billy) Hulme of Johnstown, Colorado, Deborah (Clark) Barker of Eddyville, Iowa, Brenda (Ernie) King of Ottumwa, Iowa; several nieces and nephews; and her beloved dog, Zeus. She was preceded in death by her parents; granddaughter and great-granddaughter, Lisa and Zoey Caldwell; and her best friend, Judy Ball. Open visitation will begin at 11:00 a.m. on Wednesday, July 4, 2018 at the Wagler Funeral Home in Bloomfield with family present to greet friends from 3-5:00 p.m. Cremation will follow the visitation and burial of the cremated remains will be at a later date. No funeral service is planned. A memorial has been established to the family and will be designated at a later date.

Patricia Louise Vanderhoof, 65, of Drakesville, Iowa passed away on June 29, 2018 at her home. She was born August 23, 1952 in Ottumwa, Iowa to James Thomas and Gladys Louise Long Wilster. She attended Ottumwa High School (Class of 1970) where... View Obituary & Service Information

The family of Patricia Vanderhoof created this Life Tributes page to make it easy to share your memories.

Send flowers to the Vanderhoof family.