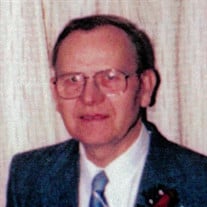 Paul Eugene Norton, 88, of Bloomfield, Iowa passed away September 10, 2015 at the Bloomfield Care Center. He was born September 14, 1926 in the Washington Township of Appanoose County, Iowa to Claude and Martha Hammond Norton. He served in the United States Air Force. On November 30, 1952 he married Betty Lou Followwill in Centerville, Iowa. The couple lived in Des Moines for several years while Paul worked for Solar Aircraft Company. The company moved operations to California and Paul and Betty moved to a farm east of Moulton, Iowa. Paul worked at several places in Bloomfield and then operated an electric motor shop in West Grove, Iowa, where they had moved too. In 2004, Paul retired and they moved to an apartment in Bloomfield. He was a member of the Bloomfield Open Bible Church where he attended faithfully as long as he could. He loved to travel, was an avid photographer, loved to make music, and was always creating things. A happy and cheerful person who worked hard and enjoyed life, Paul will be missed very much. He is survived by his wife, Betty; son, Philip (Debra) Norton of Bloomfield; three granddaughters, Nicole (Marc) Mueller of Willowbrook, Illinois, Abby and Drew Norton both of Pleasant Hill, Iowa; great-granddaughter, Kate Leigh Mueller; and several cousins. He was preceded in death by his parents; three sisters, Helen, Wilma, and Lois; and a brother, Ralph Norton. Funeral services will be at 2:00 p.m. on Monday, September 14, 2015 (His Birthday) at the Wagler Funeral Home in Bloomfield with Pastor Charles Courtney officiating. Burial will be at the West Grove Cemetery. Visitation will begin at 9:00 a.m. on Monday with the family present to greet friends from 1:00 p.m. until the time of the service. A memorial has been established to the family.

Paul Eugene Norton, 88, of Bloomfield, Iowa passed away September 10, 2015 at the Bloomfield Care Center. He was born September 14, 1926 in the Washington Township of Appanoose County, Iowa to Claude and Martha Hammond Norton. He served in... View Obituary & Service Information

The family of Paul Norton created this Life Tributes page to make it easy to share your memories.

Send flowers to the Norton family.