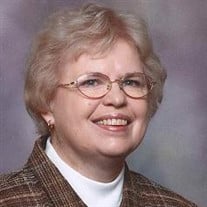 Peggy Rupe, 72, of Bloomfield, Iowa passed away on December 21, 2017 at the Hospice House in Ottumwa, Iowa with her daughter by her side after a hard-fought battle with pancreatic cancer. She was born November 3, 1945 in Vinton, Iowa to Herbert and Hollis Hatfield Hayes. Peggy married James Gutru in 1967, they later divorced. She married Charles Rupe June 7, 1986 in Bloomfield. Charlie passed away on November 28, 2016. Peggy graduated from Upper Iowa University in 1967 with her teaching certificate. She continued her education and received her Master of Science degree from NMSU in 1978 and her Educational Specialist degree in adult education from Drake University in 1999. Peggy retired from her teaching position with Davis County schools in 2004, after 25 years of service. She taught for Indian Hills Community College as well as taught in Germany, Maryland, and Illinois. Peggy taught for a total of 48 years, influencing thousands of lives. After retirement, Peggy continued in her service to education and the youth of Davis County. She was a longtime member of Delta Kappa Gamma Society International where she served as Beta Rho chapter president, Upsilon state president, as well as international committees. She was also a member of the Bloomfield Christian Church, Bloomfield Optimist Club, the American Legion Women’s Axillary, Retired School Personnel and was a Court Appointed Special Advocate volunteer. In addition to her love of education, Peggy enjoyed spending time with her family, reading, traveling, and serving those in need. Remaining to celebrate her life and to cherish her memory are her daughter, Heidi (Scott) Newlon of Blue Springs, Missouri; granddaughter, Kynser Newlon; three step-children, Stanley (Julie) Rupe of Corydon, Iowa, Stuart Rupe, Sheri (Gary) Sprouse both of Bloomfield, six step-grandchildren; 15 step-great-grandchildren; sister, Marion (David) Foster of Michigan; and countless extended family members. Peggy was preceded in death by her Parents; husband; and five siblings, Mildred, Ramona, Frank, James, and Harold. Memorial Services will be at 10:30 a.m. on Friday, December 29, 2017 at the Wagler Funeral Home in Bloomfield with Rev. Donna Olinger officiating. Burial of the cremated remains will follow at the IOOF Cemetery in Bloomfield. Visitation will begin at 1:00 p.m. on Thursday with the family present to greet friends from 5-7:00 p.m. at the funeral home. A Memorial has been established to Hospice Serving Davis & Wapello Counties and may be left at the funeral home or mailed to the family at 3400 NW Shannon Court, Blue Springs, Missouri, 64015.

Peggy Rupe, 72, of Bloomfield, Iowa passed away on December 21, 2017 at the Hospice House in Ottumwa, Iowa with her daughter by her side after a hard-fought battle with pancreatic cancer. She was born November 3, 1945 in Vinton, Iowa to Herbert... View Obituary & Service Information

The family of Peggy Rupe created this Life Tributes page to make it easy to share your memories.

Send flowers to the Rupe family.