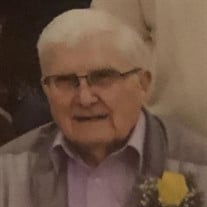 Rolla Robert “Bob” Morrow, 98, of Moulton, Iowa passed away October 31, 2020 at MercyOne in Centerville, Iowa. He was born November 21, 1921 in Moulton to Rolla R. and Verna J. Piatt Morrow. He attended Moulton School and graduated in 1939 and then attended junior college for 1½ years in Centerville. Bob enlisted in the Army on December 19, 1941 as a result of the attack on Pearl Harbor. He was in New Guinea first, then part of the invasion force in the Philippines, and was one of the first troops in Osaka, Japan. He was awarded five bronze stars during his Pacific Theatre service. He was discharged in January 1946. During the war, Bob married Mary Josephine Saner on January 24, 1943 in Burlington, Iowa. They lived in Des Moines for a short period before he transferred to Battle Creek, Michigan to train for battle in the Pacific. After the war, he came home and worked for Selix Motor in Centerville for two years as a body and fender repairman. He also worked for Boyd O’Brient Motors in the Parts Department and for Sidles parts store. He eventually got into the insurance business and was in partnership at Morrow & Harter Insurance in Moulton and then Morrow & Holmes Insurance, also in Moulton. He was a member of the Moulton Christian Church and was baptized on October 2, 1932. Bob was also in a quartet with three other gentleman, Dub Yates, Don Wright, and Ralph Mikels. For years he was the announcer for the Moulton Jamboree Parade. Bob was a wonderful dad and grandfather. He was always willing to help others and will be greatly missed by his family and friends. He enjoyed playing the card game Crazy 8 and appreciated the people who would sit down and play with him. On February 8, 2018, Jo passed away shortly after they celebrated their 75th wedding anniversary. He deeply missed her and was blessed to have been able to spend so many years together. He is survived by his daughter, Shawna (Marvin) Martin of Centerville; four grandchildren, Shanee (Noah) Aljets of Ottumwa, Iowa, Amy (Mark) Robinson of Albia, Iowa, Bradley Martin of Centerville, Iowa, Kylee (Nikki) Martin of Ottumwa, Iowa; five great-grandchildren, Kennedy Seddon, Josie Aljets, Avery Aljets all of Ottumwa, Caelan and Emilee Robinson of Albia. He was preceded in death by his parents and wife. Funeral services will be at 2:00 p.m. on Thursday, November 5, 2020 at the Moulton Christian Church with Pastors Marvin Martin and Kylee Martin officiating. Burial will be at the Sunset View Cemetery in Moulton. Please wear a mask while attending the service. Due to Covid-19, a visitation is not planned. Graveside military rites will be performed. A memorial has been established to the family and will be designated at a later date. Wagler Funeral Home in Bloomfield is assisting the family and online condolences may be directed to www.waglerfuneralhome.com.

The family of Robert "Bob" Morrow created this Life Tributes page to make it easy to share your memories.

Send flowers to the Morrow family.