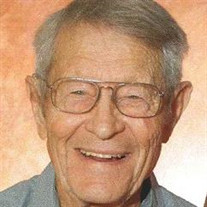 Robert Wayne Norman, 94, of Bloomfield, Iowa passed away on February 16, 2019 at Good Samaritan Society – Ottumwa. He was born November 19, 1924 in Schuyler County, Missouri to Garl and Ethel Jarvis Norman. Bob served three years in the Air Force as a tail gunner during WWII. On May 9, 1948 he married Joan Reed in Lancaster, Missouri. The couple had three children; Ronald, Michael, and Randy. Bob worked for the Iowa Department of Transportation for many years. He enjoyed bow hunting for elk in Colorado and traveling with his wife. Bob and Joan traveled to almost every state in the contiguous U.S., missing only North Dakota. They loved to travel, see new sites, and meet new people. They also enjoyed spending winter in Texas for the last 30 years, most recently in Donna, Texas, where they met such wonderful people. Bob was a member of Reed-Whisler Post #78 of the American Legion in Bloomfield. He is survived by his wife, Joan Norman; two sons, Ronald (Linda) Norman of Dundas, Virginia, Randy (Sue) Norman of Pulaski, Iowa; seven grandchildren; two step-grandchildren. He was preceded in death by his parents; son, Mike Norman; and two grandchildren. Bob’s body has been donated to science with the University of Iowa Deeded Body Program. Per his wishes, no funeral is planned at this time, but a celebration of life will be held this summer for friends and family. Memorials have been established to the Heartland Humane Society and the Troy Cemetery and may be mailed to the family or Wagler Funeral Home in Bloomfield.

The family of Robert Norman created this Life Tributes page to make it easy to share your memories.

Robert Wayne Norman, 94, of Bloomfield, Iowa passed away on February...

Send flowers to the Norman family.