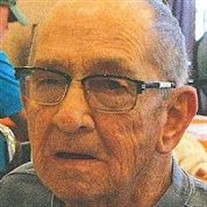 Robert L. Sullivan Sr., 82, of Bloomfield, Iowa passed away on January 18, 2018 at the Bloomfield Care Center. He was born in Sioux City, Iowa on January 15, 1936, the son of Lowell and Florence Priest Sullivan of Bloomfield. He was a graduate of Bloomfield High School in 1954. Robert met the love of his life in 1954 and on June 5, 1955 he married Wilma Brandon at the First Christian Church in Ottumwa. He was so proud of the fact that their 62nd wedding anniversary was just celebrated with their son and daughter-in-law, Robert “Bob” and Vicki Sullivan Jr., who celebrated their 35th anniversary on the same day surrounded by family. Robert and Wilma lived in Des Moines for 38 years before moving back to Bloomfield in 1996 after he retired from a career of truck driving. Robert enjoyed camping, reminiscing with friends, country music, and fishing with his son, grandchildren, and his dogs. Most of all he loved his family very much. Robert and Wilma volunteered at the Drakesville Music Festival for many years and Robert was inducted into the Drakesville Music Hall of Fame. After the festival moved to Bloomfield, they continued to volunteer until his health started to fail. Robert is survived by his wife, Wilma; son Robert (Vicki) Sullivan Jr.; four grandchildren; eleven great-grandchildren; eleven great-great-grandchildren; sister-in-law, Linda (Bob) Blackwell of Ottumwa; brother-in-law, Don (Sandy) Brandon of Melrose, Iowa; several nieces and nephews; long-time special friends, Ronnie and Barb Rominger of Fairfield, Iowa, Harry Jones of Pleasant Hill, Iowa; and a very special foster daughter, Crystal Farnsworth of Adair, Iowa. He was preceded in death by his parents, Lowell and Florence Sullivan; sister, Janet Vail; two nephews, David Vail, Mark McCall; mother and father-in-law, Kenneth and Beatrice Brandon; and sister-in-law, Shirley Brandon. Funeral services will be at 11:00 a.m. on Monday, January 22, 2018 at the Wagler Funeral Home in Bloomfield with Rev. Jack Knox and Ronnie Rominger officiating. Cremation will follow the service with burial at the IOOF Cemetery in Bloomfield at a later date. Visitation will begin at 10:30 a.m. on Sunday with the family present to greet friends from 2-4:00 p.m. at the funeral home. In lieu of flowers, a memorial has been established to his family.

Robert L. Sullivan Sr., 82, of Bloomfield, Iowa passed away on January 18, 2018 at the Bloomfield Care Center. He was born in Sioux City, Iowa on January 15, 1936, the son of Lowell and Florence Priest Sullivan of Bloomfield. He was a graduate... View Obituary & Service Information

The family of Robert L. Sullivan Sr. created this Life Tributes page to make it easy to share your memories.

Send flowers to the Sullivan family.