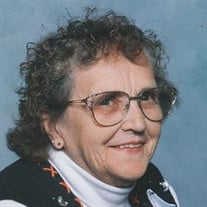 Roberta Maxine Smithburg, 87, of Bloomfield, Iowa and former resident of Milton, Iowa passed away on January 13, 2018 in Bloomfield. She was born January 18, 1930 in Van Buren County, Iowa to Glenn and Leota Townsend Campbell. She married Virgil Earl Smithburg in Milton, Iowa. Virgil passed away on August 15, 1997. Roberta was a bookkeeper and had a tax preparation business. She and her husband also owned the Milton skating rink and had a store where they sold antiques. While not working, she enjoyed spending time at the river at family gatherings fishing, having fish frys, or on the pontoon boat that Virgil built. She also like to play cards and bingo when she could. Roberta was a member of the Milton Methodist Church for many years. She is survived by a daughter, Barbara Kearns of Milton, Iowa; son, Wayne (Jean) Smithburg also of Milton; step-son, Robert Smithburg and family of California; six grandchildren, Ambrosia Fleming, Miranda Kearns, Adrianna Kearns, Robert Fleming IV, Brandon Smithburg, Heather Chaplin; and twelve great-grandchildren. She was preceded in death by her parents; husband; son, Glenn Smithburg; and a sister, Margret “Peggy” Campbell. Funeral services will be at 10:30 a.m. on Thursday, January 18, 2018 at the Wagler Funeral Home in Bloomfield with Pastor Kevin Mote officiating. Burial will be at the Sunnyside Cemetery in Milton. Visitation will begin at 9:00 a.m. on Wednesday with the family present to greet friends from 5-7:00 p.m. at the funeral home. In lieu of flowers, a memorial has been established to her family.

Roberta Maxine Smithburg, 87, of Bloomfield, Iowa and former resident of Milton, Iowa passed away on January 13, 2018 in Bloomfield. She was born January 18, 1930 in Van Buren County, Iowa to Glenn and Leota Townsend Campbell. She married... View Obituary & Service Information

The family of Roberta Smithburg created this Life Tributes page to make it easy to share your memories.

Send flowers to the Smithburg family.