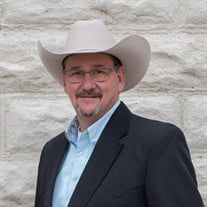 Rodney Lysle “Rod” Lynch, 56, of rural Bloomfield, Iowa passed away on February 20, 2022 at his home. He was born on April 17, 1965 in Ottumwa, Iowa to George Stuart “Stu” and Lois Marie Albertson Lynch. He married his high school sweetheart, Stephanie Wallace, on May 24, 1986. The couple has three children; Lincoln, Lexis, and Lydia. Rod attended school in Davis County, was active within the FFA, earning the Greenhand Award, and a member of the 1982 and 1983 state basketball teams. He graduated from Davis County High School in 1983. He then attended Indian Hills Community College in Ottumwa and graduated from the Machine Tech Program with an A.A.S. Degree. He taught machine tech at Indian Hills before he began working at Cargill in 1986. Rod worked at Cargill for 35 years. He was currently the Feed Team Leader. Rod has been a cow/calf farmer with Lynch Farms for over 40 years, taking part in the family business alongside his father and brother, Rick. Rod was a member of the Iowa Cattlemen Association and the Davis County Cattlemen Association. Rod taught himself to be an auctioneer. He owned and operated Lynch Boys Auction Service. He spent several years auctioning at the Make-A-Wish Foundation Gala in Cedar Rapids and Des Moines with his nephew, Alex Lynch. The two also auctioned at the Iowa State Fair for several years. Rod was in charge of various charity and fundraiser auctions. He was a member of the Iowa Auctioneer Association. Rod and Stephanie have owned Lynch Realty in Bloomfield since 1998. He was a licensed realtor and a member of the Iowa Association of Realtors. Rod was very busy in his community which he loved so much. He served as a member of the Davis County School Board for 15 years, retiring in November 2021 as president. He was also active with the Davis County Fair where he provided rides on his tractor and “people hauler” trailer. Rod was a member of the Community Betterment Group and served on the Davis County Day Care Board. Rod had many interests and hobbies including, traveling with his wife and family; old International Harvester tractors; golfing; hanging out with his cattle-dog, Hart; spending time with family and friends; attending church at The Bridge in Ottumwa, and going to the Iowa State Fair every year. Rod went to every Iowa State Fair of his lifetime, only missing the 2020 State Fair when it was cancelled due to Covid. Rod loved hard – his family, friends, dog, cattle, farm, work, co-workers, and community. His life touched many people and he will never be forgotten. He is survived by his wife, Stephanie Lynch; son, Lincoln (Josie) Lynch of Bloomfield; two daughters, Lexis (Jared) Frymoyer of Bloomfield, Lydia (Fred) Pratt of Kansas City, Missouri; six grandchildren, Landon, Jerett, and Jetson Lynch, Jackson and Journey Frymoyer, Princeton Pratt; mother, Lois Lynch of Bloomfield; sister, Rhonda (Bill Sweatman) Thomas of Nashville, Tennessee; brother, Rick (Susan) Lynch of Bloomfield; mother-in-law, Naoma (Gary) Horney of Bloomfield; and several nieces and nephews. He was preceded in death by his father, George Stuart “Stu” Lynch. Funeral services will be at 1:00 p.m. on Saturday, February 26, 2022 in the gymnasium of the Davis County High School. Words of comfort by Dan Maeder. Cremation will follow the service. Visitation will begin at 10:00 a.m. on Friday at the Wagler Funeral Home in Bloomfield with family present to greet friends from 4-7:00 p.m. at the funeral home. In lieu of flowers, memorials have been established to the Davis County Fair and the Bloomfield Country Club for new cart sheds

The family of Rodney Lynch created this Life Tributes page to make it easy to share your memories.

Send flowers to the Lynch family.