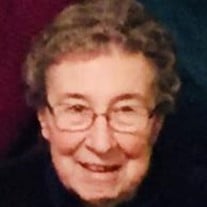 Rosemary Larue Baker Allen, 84, of rural Bloomfield passed away on November 23, 2019 at her home under the care of Hospice Serving Davis and Wapello Counties. Rosemary was born August 5, 1935 in Ottumwa, Iowa to Charley Olvin and Lila Larue Bowling Baker. Rosemary was united in marriage to Leo Wayne Allen on June 27, 1964. Together they raised three children on their Century Family Farm northwest of Bloomfield, the same farm where Rosemary was raised from age 6 until graduation from Bloomfield High School in 1954. She retired from the Davis County Courthouse after 43 years of service. Rosemary started her career in the Assessor's and the Recorder's offices and finished the last 32 years of service in the Auditor's office as First Deputy Auditor retiring in 2008. Rosemary and her husband Wayne raised Registered Black Angus cattle. She was very involved with the Wayne Allen Family Angus business where in earlier years she could be found doing everything from bringing baby calves into the world, feeding and moving cattle, to bailing hay. Rosemary was baptized and raised in the Drakesville Methodist Church of which she was a member. Besides the unconditional love for her family Rosemary enjoyed gardening, canning the produce she raised, crocheting, and providing delicious meals for her family. She passed along her love and expertise of these pleasures to her children and grandchildren. Rosemary deeply missed her husband of 54 years when Wayne passed away on February 12, 2019. Rosemary is survived by her sons Douglas Allen and Kenny (Christy) Allen both of Bloomfield, daughter, Kathy (Bill) Castle of Boone, grandchildren, Brandon (Lindsay), MacKenzie, Courtney, and Megan Allen, Katelynn and Eric Allen, and Erin, Ellen, and Audrey Castle, along with great grandchildren Claire Rose Allen and Forrest Wayne Breese. She is also survived by her sister Charlene Allen of Bloomfield, and her brother Robert Baker of Blairsville, Georgia. She is preceded in death by her parents and her brother LaVerne Olvin Baker. A graveside service will be at 11:00 a.m. on Wednesday, November 27, 2019 at the IOOF Cemetery in Bloomfield with Rev. Tim Frasher officiating. Visitation with family present to greet friends will be from 9:30 a.m. on Wednesday until the time of the procession to the IOOF cemetery at the Wagler Funeral Home in Bloomfield. Memorials may be made to the Davis County Courthouse Preservation Fund or to the Avenue of Flags.

Rosemary Larue Baker Allen, 84, of rural Bloomfield passed away on November 23, 2019 at her home under the care of Hospice Serving Davis and Wapello Counties. Rosemary was born August 5, 1935 in Ottumwa, Iowa to Charley Olvin and Lila Larue... View Obituary & Service Information

The family of Rosemary Allen created this Life Tributes page to make it easy to share your memories.

Send flowers to the Allen family.