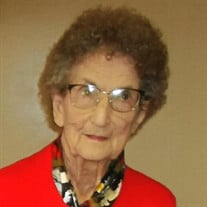 Ruby Julia Smith, 94, of West Grove, Iowa passed away June 3, 2022 following a brief illness. Born February 6, 1928, in Langtree, Devon, England, she was the sixth of seven children. In the 1950’s she was staying with relatives in Swindon, England, and met an American stationed at a nearby medical base during the Korean War. Wasting no time, she pursued him. The month after the accession of Queen Elizabeth II to the throne of England, Ruby Sutton married William (Bill) Smith in what would become her own 70-year reign as the matriarch Ruby Smith. At the conclusion of the Korean War, the US Air Force decided that all the war brides in England would be sent to America while their husbands concluded their service in England. With two children under the age of two and another on the way, dealing with sea sickness and a reaction to the smallpox vaccination, Ruby found herself on a ship crossing the Atlantic. She was headed to New York where she would meet her reluctant in-laws. From there, they would travel by train to Iowa. She was a courageous British pioneer to undertake the journey and settle in Davis County. Throughout her life she was strong-willed and as tough as nails. Bill joined her later and they eventually located outside of West Grove where they would remain for the rest of their lives. In total they had six children: Terry, Dean, Marilyn, Bill, Rick, and Phillip. Her table was always open, and she would feed anyone. With the addition of grandchildren and great-grandchildren Ruby could single handedly host and cook a holiday meal for twenty-five or more. She would scan the plates on the table to make sure to give you an additional helping of whatever she deemed you needed. Bill and Ruby spent Saturday nights dancing at the VFW in Bloomfield. They vacationed internationally and enjoyed cruises with groups from Bill’s employer and visited her home in England numerous times. Later in life, they wintered in Texas for many years with daughter, Marilyn. Ruby passed on a love of vegetable gardening, flower gardening, birdwatching and travel to children and grandchildren. Ruby was an excellent caregiver and was protective of her family. She always put the comfort of others above her own needs and gave of herself freely. She valued being independent and was reluctant to accept help or have anyone make a fuss over her. Ruby was colorful both in spirit and dress. She had an outsized personality, and you always knew when she had arrived at an event. Ruby was fun and could tell stories to match those of her story-telling husband. She was direct and always told it like it was. She was the lifeforce of the Smith family to whom we were all tethered. The platinum jubilee for Mrs. Ruby Smith has ended but she had an excellent, long run wearing the crown. She was our queen, our mother, our grammy. There will never be another like her. Ruby is survived by children Terry (Craig) Swaim of Drakesville, Dean (Teresa) Smith of Bloomfield, Bill (Cheri) Smith Jr. of Burlington, Rick (Tiffany) Smith of Des Moines and Phillip (Jill Leggett) Smith of Tiffin; brother Denny Sutton of England; and numerous grandchildren, great-grandchildren, and great-great-grandchildren. Ruby was preceded in death by husband, Bill, and daughter, Marilyn Smith-Jones. Per Ruby’s request there will not be a public service and those who wish to express sympathy may consider making a donation to their favorite charity in her name. .

Ruby Julia Smith, 94, of West Grove, Iowa passed away June 3, 2022 following a brief illness. Born February 6, 1928, in Langtree, Devon, England, she was the sixth of seven children. In the 1950&#8217;s she was staying with relatives in Swindon,... View Obituary & Service Information

The family of Ruby Smith created this Life Tributes page to make it easy to share your memories.

Send flowers to the Smith family.