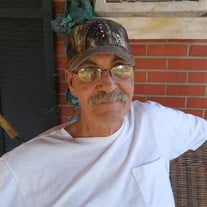 Russell William Gibson, 68, of New Bloomfield, Missouri passed away on August 28, 2021 at SSM Health St. Mary’s Hospital in Jefferson City, Missouri. He was born April 3, 1953 in Ottumwa, Iowa to William “Bill” and Joann Noe Gibson. He married Sandra Bragg on March 30, 1973 and they had one daughter, Jill. Russell worked in the auto glass industry and traveled around to several states opening auto glass stores. He opened stores in Tennessee, Kentucky, and Missouri and was the manager for several years. He enjoyed spending time fishing, working on model airplanes, building guns, playing softball, and all sorts of hunting – especially squirl hunting. His favorite thing to do was spend time with his family and he really enjoyed spending time with his granddaughter, Ellie, who was his boss. Russell will be greatly missed by his friends and family. He is survived by his wife, Sandra; daughter, Jill (Isaiah) Harmon of Ashland, Missouri; three grandchildren, Cassidy, Andrew, and Ellie Harmon; sister, Tammy (Jim Belmudez) Gibson; and several nieces and nephews. He was preceded in death by his parents and brother, Kimball Gibson. Memorial services will be at 1:00 p.m. on Thursday, September 2, 2021 at the Wagler Funeral Home in Bloomfield with Amy Sanders officiating. Burial of the cremated remains will be at a later date at the West Grove Cemetery. Visitation will begin at 11:00 a.m. on Thursday with the family present to greet friends from noon until the time of the service at the funeral home. Masks are recommended. In lieu of flowers, a memorial has been established to his family.

The family of Russell Gibson created this Life Tributes page to make it easy to share your memories.

Send flowers to the Gibson family.