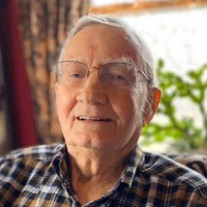 Russell Dean Hopkins, 85, of Bloomfield, Iowa passed away on May 28, 2020, at his home surrounded by family. Russell was born on June 30, 1934, to Trenton and Leota (Horn) Hopkins at the family farm in Davis County. Russell was married to Dorothy Joann Sager on April 30, 1955, and they just celebrated their 65th year of marriage. He attended two years at Iowa State University after graduating from Bloomfield High School in 1951. Russell started farming in 1953 but also worked for Davis County Secondary Roads on the Survey Crew; then at Hutchings Plumbing and Heating; going to Union Carbide and working ten years on the printing press; and then was elected to the Board of Supervisors of Davis County starting in 1974-1986. While he was serving on the Board, he served on several regional boards, but he was a farmer always at heart working at least two jobs until all of his children were out of school. He was a lifetime member of the Farm Bureau serving as President for two years. He retired in 1996, and started being a snowbird in Florida until moving full time in 2006. In 2019, he and Dorothy returned to Bloomfield to set up residence. Russell is survived by his wife of 65 years; his daughter, Jodi K. Hardman of Jefferson City, Missouri; his two sons, David P. Hopkins (Becky) of Bloomfield, and Chris A. Hopkins (Lindsay) of Pella, Iowa; seven grandchildren, Dusti (Brian), JT (Ashley), Luke (fiance Jaimie Crumley), Brittany, Samantha (Matt), Piarra (Levi), and Lucy; and two step-grandsons, Jos (Brittany) and Nyran Chohan; six great-grandchildren and two step-great-grandchildren. He is also survived by his brother, Larry Hopkins, and his sister, Nan (Joe) Morgan as well as nieces and nephews. Russell was predeceased by his parents and his parents-in-law, John and Irma Sager; and his son-in-law, Rex Hardman. Wagler Funeral Home in Bloomfield is in charge of his arrangements where he will be cremated and his ashes will be scattered on the family farm. No services will be held at this time due to the Covid-19 virus restrictions. Memorials may be made to the Davis County Historical Society and mailed to Dorothy at 103 W. North St., Bloomfield, Iowa 52537.

Russell Dean Hopkins, 85, of Bloomfield, Iowa passed away on May 28, 2020, at his home surrounded by family. Russell was born on June 30, 1934, to Trenton and Leota (Horn) Hopkins at the family farm in Davis County. Russell was married to... View Obituary & Service Information

The family of Russell Hopkins created this Life Tributes page to make it easy to share your memories.

Russell Dean Hopkins, 85, of Bloomfield, Iowa passed away on...

Send flowers to the Hopkins family.