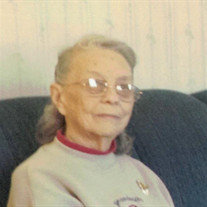 Elva Ruth Dunkin, 83, of Bloomfield, Iowa passed away August 6, 2015 at Good Samaritan Society – Ottumwa. She was born September 27, 1931 in Lucerne, Missouri to Rufus Fredrick and Della Elva Cornmesser Bowman. She married Leon Dunkin May 22, 1949 in Unionville, Missouri. Leon preceded her in death February 14, 1999. Ruth was a homemaker and had worked at the Davis County Hospital as a dietary aide. She loved the family farm, gardening, and taking care of her flowers. In spare time she kept busy doing all sorts of crafts. An animal lover her whole life, Ruth had a special love for her dog, LaChica. She is survived by two daughters, Charolette (Frank) Ferrel of Birmingham, Iowa, Carol (Matt) Shoemaker of Memphis, Missouri; two sons, Terry (Gale) Dunkin of Agency, Iowa, Alan (Carrie Stroud) Dunkin of Bloomfield; eleven grandchildren; 13 great-grandchildren; four sisters, Marion Vacher of South Carolina, Marjorie Tipton of Indiana, Juanita Hall and Anna Brown both of Missouri; and her dog, LaChica. She was preceded in death by her parents; husband; sister, Sandra Gadberry; and two brothers, James and Charlie Bowman. Funeral services will be at 11:00 a.m. on Tuesday, August 11, 2015 at the Wagler Funeral Home in Bloomfield with Pastor R.J. Montis officiating. Burial will be at the IOOF Cemetery in Bloomfield. Visitation will begin at 9:00 a.m. on Tuesday with the family present to greet friends from 9:30 a.m. until the time of the service at the funeral home. A memorial has been established to the Alzheimer’s Association.

The family of Ruth Dunkin created this Life Tributes page to make it easy to share your memories.

Send flowers to the Dunkin family.