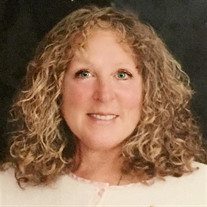 Sandra Elaine Tripp Lawrence, 62, of rural Bloomfield, Iowa passed away May 5, 2015 at her home. She was born February 16, 1953 in Rolla, Missouri to Raymond and Delilah Swindler Tripp. She graduated in 1971 from Davis County High School and attended Indian Hills. She married Larry Lawrence April 25, 1985 in Bloomfield. She had previously worked at John Deere and Everco in Ottumwa. Sandi loved flowers and anything outdoors and spent much of her time making things beautiful. She loved being on “deer watch” and spending time on her land with her husband. From 7th grade through high school, Sandi was a cheerleader. She was also an avid lover of softball and played many years on a team with her friends called the S-Hitters. She was ferociously protective of her family and loved the Davis County Fair and Drakesville reunion. She is survived by her mother, Delilah Morrow of Bloomfield; husband, Larry Lawrence; six children, Randal and Solomon Miller, Candi Miller, Jeff (Jennifer) Lawrence all of Bloomfield, Greg (Sandy) Lawrence and Kris (Tom) Roberts both of Kansas City, Missouri; eight grandchildren, Hannibal, Simon & Chloe Lawrence, Jack, Sam and Joe Roberts, Logan and Isabella Lawrence; great-granddaughter, Aubree Miller; two sisters, Rheta (Tracy) Morgan, Beth Marshall; two brothers, Dave (Kayla) Tripp, Stuart (Marti) Morrow; two nieces, Jenni Roberts, Alissa (Joey) Swarts; seven nephews, Shamus and Schuyler Tripp, Shane (Allison) Long, Brock and Blake Simmons, Spencer (Jennifer) Garmon and Tanner Garmon; and many great nieces, nephews, family and friends. She was preceded in death by her father, Raymond on November 24, 1965; step-father, Donnal Morrow in 2001; and her grandparents, James and Melinda Tripp, Ed and Mae Swindler. Memorial services will be at 11:00 a.m. on Saturday, May 9, 2015 at the Wagler Funeral Home in Bloomfield with her son Jeff Lawrence officiating. Burial of the cremains will be at the Savannah Cemetery in Davis County at a later date. Visitation will begin at 9:00 a.m. on Saturday with the family present to greet friends from 9:30 a.m. until the time of the service. In Lieu of flowers, memorials have been established to HCI Hospice Care Services in Centerville. Online condolences may be directed to www.waglerfuneralhome.com.

Sandra Elaine Tripp Lawrence, 62, of rural Bloomfield, Iowa passed away May 5, 2015 at her home. She was born February 16, 1953 in Rolla, Missouri to Raymond and Delilah Swindler Tripp. She graduated in 1971 from Davis County High School and... View Obituary & Service Information

The family of Sandra Lawrence created this Life Tributes page to make it easy to share your memories.

Send flowers to the Lawrence family.