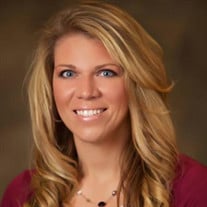 Sarah Jean Aeschliman Grim, 38, of Bloomfield, Iowa passed away on March 23, 2022 at her parent’s home in Bloomfield. She was born on November 13, 1983 in Davis County, Iowa to Dave and Jody Wilkinson Aeschliman. She graduated from Davis County High School in 2002. While in high school, Sarah was an outstanding athlete participating in volleyball, basketball and golf. She earned 1st Team All State in volleyball her senior year along with other numerous awards. She was also an outstanding student earning an academic scholarship to Indian Hills Community College at which she completed her AA Degree in just one year. In later years, she completed her BA Degree in business through the University of Phoenix. Sarah married Ben Grim on February 21, 2009 in Estes Park, Colorado. The couple had two children, Jackson and Corbin. Her sons were the two most important people in her life and she loved them dearly. Sarah has been employed by the Success Bank in Bloomfield for 16 years and was currently a loan officer in the mortgage department. She was a member of the Optimist Club, Davis County Foundation, Iowa Bankers Association and Dollars for Scholars. Sarah volunteered at the Fort Bloomfield Rodeo and Davis County Fair doing tattoos for kids. She loved to golf and was a member of the Bloomfield Country Club where she served as bookkeeper. Sarah also found time to coach youth and junior high volleyball as well as coach freshman basketball. Sports were a big part of her life and she was an avid Iowa Hawkeyes fan. She loved attending Iowa Football games, especially when her brother, Wesley, was playing for them. She also attended many Iowa Basketball games over the years. Sarah’s hobbies included golfing, gardening, decorating, and crafts. Her cheesecakes and cupcakes were famous and she would happily make them for anyone that asked. Sarah stayed busy with many interests in life, but above everything else, she was the most caring and loving mother, daughter, sister, and sister-in-law. She loved attending her children’s sporting events and spent many happy times with her family at her parent’s pool. Her life touched many people and she will be deeply missed by them all. She is survived by two sons, Jackson and Corbin Grim of Bloomfield; parents, Dave and Jody Aeschliman of Bloomfield; brother, Wesley and wife Randell Aeschliman of Albia, Iowa; three nephews, Oliver, Toby, and Rory of Albia; companion, B.J. Grant of Bloomfield; and numerous aunts, uncles, and cousins. She was preceded in death by her grandparents, Robert and Pat Wilkinson, Willis and LaVeta Aeschliman; an aunt, Diane Wilkinson; and an uncle, Larry Wilkinson. Graveside services will be at 1:00 p.m. on Sunday, April 3, 2022 at the IOOF Cemetery in Bloomfield with Pastor Charles Courtney officiating. Following the graveside service, a Celebration of Life will be held at the Bloomfield Country Club from 2-5:00 p.m. Memorials have been established to her two boys, Jackson and Corbin and also the Bloomfield Country Club.

Sarah Jean Aeschliman Grim, 38, of Bloomfield, Iowa passed away on March 23, 2022 at her parent&#8217;s home in Bloomfield. She was born on November 13, 1983 in Davis County, Iowa to Dave and Jody Wilkinson Aeschliman. She graduated from Davis... View Obituary & Service Information

The family of Sarah Grim created this Life Tributes page to make it easy to share your memories.

Send flowers to the Grim family.