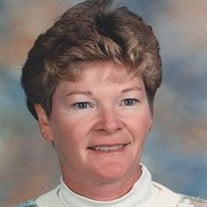 Sharon Ann Limkeman of Bloomfield, Iowa passed away August 10th, 2018 at Iowa Methodist Medical Center in Des Moines. She was the fourth of seven children born to Wendell and Louise Heagy Wildrick of Carthage, Illinois. She was raised on a farm where she spent many happy days playing softball with her brothers and sisters. Sharon and Darrell Limkeman were united in marriage in Sutter, Illinois and recently celebrated their 44th wedding anniversary. Sharon graduated from Carthage Community High School in Carthage, Illinois and attended Western Illinois University in Macomb where she graduated with a Bachelor of Science in Education. She taught one year in the LaHarpe School District in LaHarpe, Illinois before marrying Darrell and moving to Ames, Iowa for one year while he finished his graduate program. Sharon then taught in the Fox Valley School District in Cantril, Iowa for 3 years and the Davis County School District in Pulaski and Bloomfield, Iowa for 28 years. Sharon was a devoted wife, mother, grandmother, daughter, sister, aunt and friend. She adored her students and touched many lives throughout her career. She enjoyed spending time with family, traveling and attending her granddaughters' sporting events and school activities. Formerly, she enjoyed participating in various sports including softball and golf. She was a member of the Bloomfield Country Club where she had spent many hours volunteering her time for the betterment of the course and clubhouse. She is survived by her husband Darrell; daughter, Wendy (Trent) Barker of Floris, Iowa; two granddaughters, Madeline and Lydia Barker; three brothers, Danny Wildrick of Hamilton, Illinois, Phil (Beverly) Wildrick and Kent (Maria) Wildrick both of Carthage, Illinois; sister, Diana (Leon) LeMaire of Basco, Illinois; and a brother-in-law, Narlyn Nelson of Bloomington, Illinois. She was preceded in death by her parents; sister, Debbie Nelson; brother, Jack Wildrick; and a sister-in-law, Bev Wildrick. Funeral services will be at 10:30 a.m. on Wednesday, August 15, 2018 at the Wagler Funeral Home in Bloomfield with Pastor Matt Froah officiating. Cremation will follow the service. Visitation will begin at 9:00 a.m. on Tuesday with the family present to greet friends from 5-7:00 p.m. at the funeral home. Memorials in honor of Sharon may be made to the Bloomfield Country Club.

Sharon Ann Limkeman of Bloomfield, Iowa passed away August 10th, 2018 at Iowa Methodist Medical Center in Des Moines. She was the fourth of seven children born to Wendell and Louise Heagy Wildrick of Carthage, Illinois. She was raised on a... View Obituary & Service Information

The family of Sharon Limkeman created this Life Tributes page to make it easy to share your memories.

Send flowers to the Limkeman family.