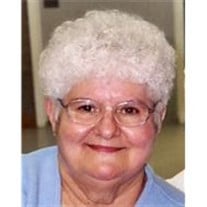 PULASKI: Shirley Louise Robison, 76, of Pulaski, Iowa died February 16, 2012 at Mercy Medical Center in Des Moines. She was born October 8, 1935 near Omaha, Missouri to Joseph Lindsey Tenson and Dell Vina Hogg Morgan. She married Norvel Robison March 29, 1954 in Ottumwa, Iowa. She was a homemaker. Shirley was a member of the Pulaski Mother’s Club, Pulaski United Methodist Church and enjoyed crocheting. She volunteered at the Pulaski senior citizens meal site and the Pulaski Corn Show for years, often donating various baked goods. She loved spending time with her grandchildren and was a devoted Chicago Cubs fan. She is survived by her husband; two daughters, Lynn (Richard) Whitacre, Kim (Fred) Smith both of Pulaski, Iowa; a son, Jerry (Kristy) Robison of Moravia, Iowa; nine grandchildren; ten great-grandchildren; a brother, Roy (Patty) Morgan of Livonia, Missouri; and a sister-in-law, Marjorie Morgan of Queen City, Missouri. She was preceded in death by her parents; two brothers, Byron and Raymond Morgan; and three sisters, Nellie Montgomery, Mabel Newland, and Agnes Archer. Funeral services will be at 10:30 a.m. on Monday, February 20, 2012 at the Wagler Funeral Home in Bloomfield with Rev. Dick Iles officiating. Burial will be at the Pulaski Cemetery in Pulaski, Iowa. Visitation will begin after 9:00 a.m. on Sunday with the family present to greet friends from 2-4:00 p.m. at the funeral home. In lieu of flowers, a memorial has been established to the Pulaski Corn Show.

The family of Shirley Robison created this Life Tributes page to make it easy to share your memories.

Send flowers to the Robison family.