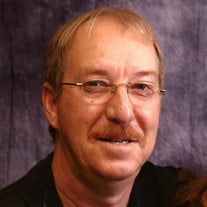 Jerry Steven "Steve" Engle, 66, of rural Bloomfield, Iowa passed away on January 17, 2022 at his home with his family by his side. He was born on March 16, 1955 in Ottumwa, Iowa to Charles Thomas Engle and Lela Faye Scott. He graduated from Davis County High School in 1974. On January 10, 1976, he married Cindy Hardin in Pulaski, Iowa. The couple lived in Davis County and raised two children, Cory and Matthew. Steve worked as a machinist for Rexnord/Lunds in Ottumwa for many years and then worked at Performance Pipe in Bloomfield until his retirement in 2018. He was a member and past president of the local chapters of the United Steelworkers of America and the International Association of Machinists and Aerospace Workers. Steve was the kind of wonderful father who showed his love not just in what he said, but in what he did. He was the kind of father who would wake up his daughter in the middle of the night after a rain so they could collect nightcrawlers together for fishing trips. He turned big, unwieldy rocks into ornamental stones for his garden just because his son had gathered them. He was a loving husband, an amazing father, a dedicated and caring son, a mischievous brother, a boisterous friend, and a quietly-kind and good man who will be missed forever. He is survived by his wife, Cindy Engle; daughter, Cory Engle of Phoenix, Arizona; and two brothers, Larry Engle of Ottumwa, Iowa, Wayne (Kay) Engle of Brillion, Wisconsin. He was preceded in death by his parents and son, Matthew. Visitation will begin at noon on Sunday, January 23, 2022 with the family present to greet friends from 3-5:00 p.m. at the Wagler Funeral Home in Bloomfield. Burial of the cremated remains will be at the Pulaski Cemetery at a later date. A memorial has been established to his family.

Jerry Steven "Steve" Engle, 66, of rural Bloomfield, Iowa passed away on January 17, 2022 at his home with his family by his side. He was born on March 16, 1955 in Ottumwa, Iowa to Charles Thomas Engle and Lela Faye Scott. He graduated from... View Obituary & Service Information

The family of Steve Engle created this Life Tributes page to make it easy to share your memories.

Send flowers to the Engle family.