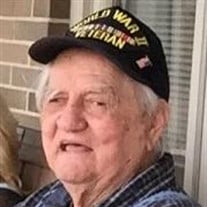 Victor Arnold McClure, 91, of Floris, Iowa passed away Tuesday, January 10, 2017 at Good Samaritan Society – Ottumwa. He was born June 14, 1925 in Wapello County, Iowa to Clyde D. and Millie Huffman McClure. He was a proud WWII veteran and after serving in the U.S. Navy, he married Leona Marie Talley on November 30, 1947. Leona passed away on October 27, 2013. Victor was a hard worker and held many different jobs throughout his lifetime. He will be remembered by many for his lightheartedness, positive attitude, and his many “War Stories.” He was a member of the Floris Baptist Church, Reed-Whisler Post #78 of the American Legion in Bloomfield, and the Oddfellows Lodge in Eldon, Iowa. The family wishes to extend thanks to the staff and caregivers at Good Samaritan Society – Ottumwa for their care over the last three-and-a-half years. Victor called it “Home” and enjoyed joking with the staff who cared for him. Left to tell his many stories are three children, Vicki Berardi of West Des Moines, Iowa, Phil (Sheila) McClure, Greg McClure both of Floris, Iowa; eight grandchildren; eight great-grandchildren; sister, Patty Pearson of Eldon, Iowa; and a sister-in-law, Connie (Larry) Birdsall of Ankeny, Iowa. He was preceded in death by his parents; wife of 66 years, Leona; great-grandson, Dominic Clark; four brothers, Gail, Wallace, Fred, and Wayne McClure; a sister, Janice Chickering; and a son-in-law, Romeo Berardi. Funeral services will be at 10:00 a.m. on Saturday, January 14, 2017 at the Wagler Funeral Home in Bloomfield with Pastor Gordon Hawkins officiating. Burial with graveside military rites performed by Reed-Whisler Post #78 American Legion will be at Memorial Lawn Cemetery in Ottumwa, Iowa. Visitation will begin at 9:00 a.m. on Friday with the family present to greet friends from 6-8 p.m. at the funeral home. Memorials have been established to the Floris Baptist Church and Good Samaritan Society – Ottumwa.

The family of Victor McClure created this Life Tributes page to make it easy to share your memories.

Send flowers to the McClure family.