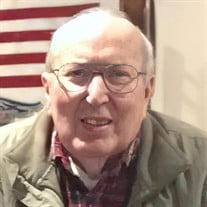 William Richard Huggins, 85, of Atkins, Iowa passed away on April 26, 2021 at the Iowa Methodist Hospital in Des Moines. Bill led an incredibly full life. A loving husband, wise father, loyal brother, and proud grandfather, Bill was a wonderful storyteller. Whether it was sitting among family and friends or fishing with anyone willing to join along, his keen mind and quick wit entertained multiple generations. An Army veteran, he served his country in Germany and Austria from 1954 to 1956, which was an unforgettable experience. Bill often shared memories about his overseas adventures. Bill was a member of the American Legion and VFW Post 788 in Cedar Rapids. He was an active VFW member, where he enjoyed relaxing, attending events, and watching Hawkeye games. Family was everything to Bill. He placed his loved ones at the center of his world. Bill and Janice taught this core value to their children and grandchildren. They traveled to countless athletic and school events, always cheering from the sidelines, stands or auditoriums. Professionally, Bill was a successful leader and valued employee. He started his career at Collins Radio in Cedar Rapids working in the tool and die division. Bill held several positions during his 27 years of employment culminating as head of the Purchasing Department. His career then took Bill and Janice to Indiana, Alabama, and Illinois. He retired in 2004 from Richardson Electronics in La Fox, Illinois, where he served as the head of Engineering. Bill and Jan returned to Iowa in 2005 to be closer to family. Born on December 9, 1935 to Floyd and Golda Huggins in Bloomfield, Iowa, Bill graduated from Bloomfield High School in 1954. He married his high school sweetheart, Janice Rudd, in 1957. Bill is survived by his wife of 64 years, Janice; three sons, Steve (Cate), Craig (Joan), and Jeff (Catherine); four grandchildren, Nick (Jenny), Zach, Anna, and Luke; siblings, Oma Munn, Rose (Rusty) Grinstead, Dwight (Jacquie) Huggins, Ron (Pat) Huggins, Harold Huggins, Max (Tonya) Huggins, Gary Joe (Pam) Huggins, Stan (Deb) Huggins; a step-granddaughter; three step-great-grandchildren; a step great-great-grandson; four sisters-in-law, Judy (Jim) Matheney, Donna Jean (Don) Treharne, Joy Iacono, Marietta Huggins; and dozens of nieces and nephews. He was preceded in death by his parents; in-laws, Forrest and Hazel Rudd; three brothers, Eugene “Smoke,” Jim, Tom; brother-in-law, Jim Munn; and two sisters-in-law, Marlene Huggins and Betty Huggins. Funeral services will be held at 1:00 p.m. on Saturday, May 1, 2021 at the Wagler Funeral Home in Bloomfield with Pastor Jon Klaus officiating. Burial with graveside military rites performed by Reed-Whisler Post #78 of the American Legion will be at the IOOF Cemetery in Bloomfield. The funeral will be live streamed on the Wagler Funeral Home Facebook page. Visitation will begin at 1:00 p.m. on Friday with the family present to greet friends from 5-7:00 p.m. at the funeral home. Masks are requested for all services. Memorial contributions can be made to VFW Post 788 in Cedar Rapids.

The family of William "Bill" Huggins created this Life Tributes page to make it easy to share your memories.

William Richard Huggins, 85, of Atkins, Iowa passed away on April...

Send flowers to the Huggins family.