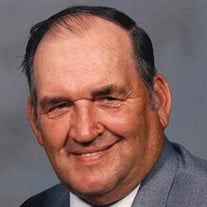 William Dwight “Bill” Downing, 85, of Bloomfield, Iowa passed away February 13, 2016 at the Bloomfield Care Center. He was born February 16, 1930 west of Troy, Iowa to Irvin Dwight “Hap” and Beulah Vera Wilkinson Downing. He married Donna Barker on September 20, 1953 at the Bloomfield Christian Church. Donna passed away January 2, 2015. The couple lived on a farm northwest of Troy, Iowa for 48 years, where they raised three children. Bill loved working on the farm, raising livestock and crops. Every Spring he looked forward to the smell of earth being turned over during planting. Aside from farming, he also worked at Chain and Cable in Fairfield for 17 years. He enjoyed spending winters with his wife in Donna, Texas, camping in their RV. Other interests included boating, traveling, moving dirt around in his bulldozer, and his two dogs, Bear and Katie. Above everything else was his love for his wife, children, grandchildren, and great-grandchildren. Bill served in the United States Army during the Korean War. He was proud to serve his country and years later would start the Troy Avenue of Flags at the Troy Cemetery to honor his fellow veterans. He spent countless hours putting out flags, taking them down, and maintaining them in between times of display. He is survived by his two daughters, Kris (Bob) Hougland, Lori (Mike) Lawson both of Bloomfield; son, Don (Denise) Downing of Ottumwa; eight grandchildren, Jason (Melissa) Hougland, Jessica Hougland, Troy (Katie) Downing, Karie Downing, Alison Downing, Erin (Matt) Gorman, Cody Sickels, Shalayla Sickels; five great-grandchildren, Chase and Alexis Hougland, Justyn Hale, Chloe and Ethan Umphress; and his brother, Richard (Sara) Downing of Hannibal, Missouri. He was preceded in death by his parents and wife. Visitation will begin at 9:00 a.m. on Wednesday, February 17, 2016 at the Wagler Funeral Home in Bloomfield. Military rites will be performed by Reed-Whisler Post #78 of the American Legion at the funeral home at 5:00 p.m. on Wednesday with family visitation following until 7:00 p.m. Cremation will follow the visitation and burial of the cremated remains will be at a later date at the Troy Cemetery. Memorials have been established to the Troy Avenue of Flags and Good Samaritan Hospice.

The family of William Dwight Downing created this Life Tributes page to make it easy to share your memories.