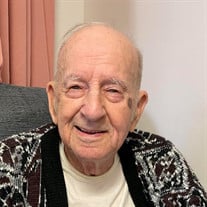 Willis L. Veatch, 95, of Bloomfield, Iowa went to be with his Lord & Savior on April 2, 2022 at the Good Samaritan Nursing Home in Ottumwa, Iowa. He was born on August 23, 1926 to Lester Eugene and Eunice (Lunsford) Veatch of Savannah, Iowa. Willis married Roberta Irene (Dabney) Veatch on June 27, 1948 and they were married 45 years. Roberta passed away on June 21, 1993. They have four daughters and one son who passed away in infancy. Daughters are Pam Kendrick of Springfield, Missouri, Brenda (Ronnie) Bogle of Garner, Iowa, Mary Christie of Bloomfield, and Renita (Raymond) Murrell of Bloomfield. Willis was a member of the Church of Christ of Ottumwa, Adella & Finley for many years. He worked at Bimco in Bloomfield when it first opened as the engineer and designer of bumper guards, tailgates and accessories. He then went to work in Ottumwa at Barkers and worked there for 24 years until they closed. He then came back to Bimco in Bloomfield for 20 years until his retirement in 2001. After retirement he began hauling for the Amish Community. He thoroughly enjoyed being with them and many became his friends. Willis loved going to Bluegrass Festivals, Mt. Pleasant Old Threshers, watching old family movies when his kids were all home, and rebuilding John Deere tractors and inventing helpful items. One thing Willis was well known for was when he was trying to figure something out while inventing, he would put his tongue in his cheek. He said, “It always made things clearer.” He was preceded in death by his parents, wife, son Keith, four brothers, and a son-in-law, John Christie. He is survived by his four daughters; sister, Joyce Elliott; and many grandchildren and great-grandchildren. Graveside services will be at 11:00 a.m. on Friday, April 8, 2022 at the Howell Cemetery in Davis County. Nephews Rick Veatch, Mike Veatch, and Randy Veatch will officiate. Visitation will begin at 1:00 p.m. on Thursday with the family present to greet friends from 5-7:00 p.m. at the Wagler Funeral Home in Bloomfield. Memorials may be made to the Good Samaritan Hospice of Wapello County or Good Samaritan Nursing Home of Ottumwa.

Willis L. Veatch, 95, of Bloomfield, Iowa went to be with his Lord & Savior on April 2, 2022 at the Good Samaritan Nursing Home in Ottumwa, Iowa. He was born on August 23, 1926 to Lester Eugene and Eunice (Lunsford) Veatch of Savannah, Iowa.... View Obituary & Service Information

The family of Willis Veatch created this Life Tributes page to make it easy to share your memories.

Send flowers to the Veatch family.